All Collections
Planner
Data load
Hourly updates in a schedule

Hourly updates in a schedule

Written by Pablo Martinez
Updated over a week ago

In SmartMonkey Planner you can know at any time what is the estimated time of arrival of a driver to a specific stop. In addition, you can also know at what exact time a stop has been canceled or if it is in transit at that time.

How does it work

In Planner, when you are in a schedule, schedules will appear next to each driver and stop.

So that you can know exactly the status of each stop and that of the driver himself easily and visually, each schedule will appear with a different color. Next, we show you the summary of each color and its meaning within the planning: 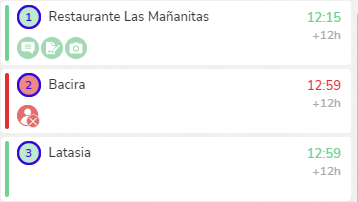 In this way, and as shown in the image, the cancellation schedule, in transit, completed or in planning will appear right next to each stop and with the identifying color of its status.

The time that appears will be the same in which the stop was canceled or completed, for example. Also, if a stop has been completed late, the approximate jet lag will appear just below. As shown in the image "+ 12h". This will help you keep track of how many minutes or hours the stop has been late.

Did this answer your question?